It is better to look at the screens than to live in them. 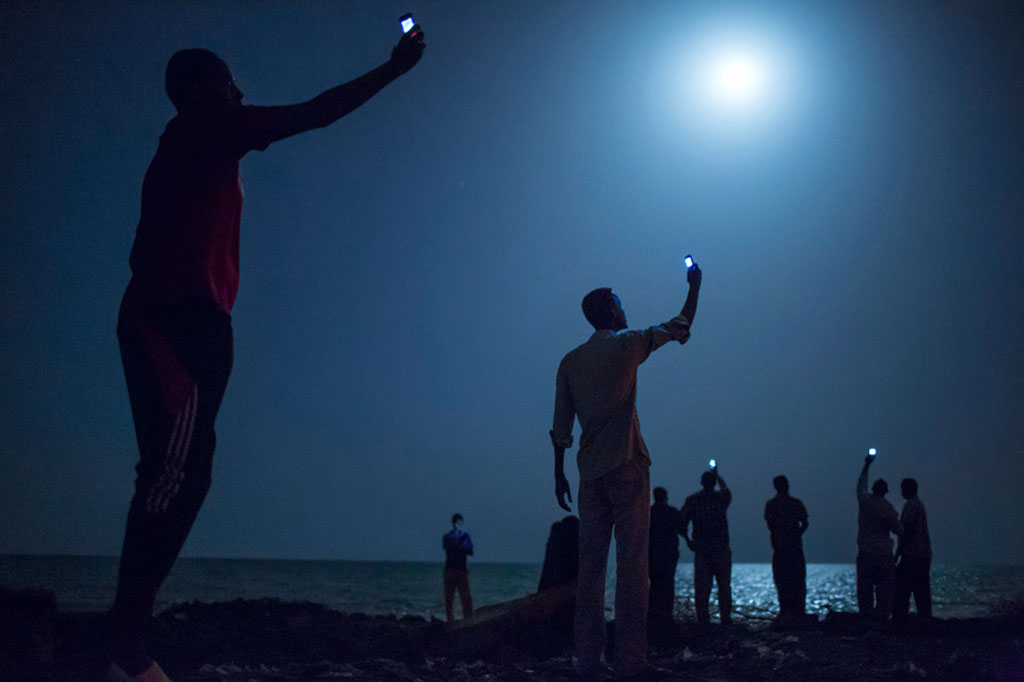 The relevance of the Mobile World Congress in Barcelona can be understood from the fact that we are starring in an era in which cell phones have become an inescapable part of our daily lives, of our selves. The cell phone is our extended self. We can say that the world we know is a society that lives in a “walled-in” state. Our relationship with that world and with others is happening through screens, through our cell phones, tablets, computers, and so many other devices.

We are heading towards a connected world. Where connection and connectivity will accelerate in the next 3 years. Certainly the connection between people and devices, between devices and devices, between machines and robots and between all of them and people. We will always be left with the question of whether the connection between humans will be able to transcend the technological barrage. “Since its inception, humanity has always depended on machines for survival. Fate, it seems, is not without a certain irony” said Morpheus in The Matrix.

The technological revolution is moving so fast that cell phones are no longer the only attraction at the congress, although, for the moment, they are the main protagonists. The internet of things, virtual assistants, 5G, robots and autonomous cars promise to change everything in just a few years. Surely for future editions they will have to rethink the name in Spanish as it is outdated: Mobile World Congress; it is much more than telephony …

Among all the news, I highlight these 5 relevant topics:

1.- The year of 5G. 5G technology will be the lifeblood of the new economy. It will revolutionize the way we communicate by increasing the speed and the number of devices that can be connected at the same time, as well as reducing latency (network response time). Self-driving cars, virtual reality, smart cities, and networked robots will all be powered by 5G technology very soon. 5G promises to open the door to new surgical procedures, safer means of transportation, and instant communication for emergency and relief services.

The new Generation is already warming up, while it is estimated that deploying the 5G network in the United States alone could represent an investment of around 300 billion dollars.

2.- Artificial Intelligence. According to the consulting firm Gartner, the use cases of artificial intelligence in smartphones will proliferate progressively until 2022, when 80% of the devices sold are expected to have AI capabilities, compared to the current 10%. Big Data merges with new ultra-fast new communications networks, with machine learning capabilities, with Artificial Intelligence and all in a device that fits in the palm of our hand.

Among so much digital noise, I was struck by the words of Cynthia Breazeal, MIT engineer who said that “the robot will get excited with you, and that will make you excited. Emotion cannot be separated from cognition and learning. Cognition is the what, but emotion is the what-ifs, and my team and I design robots for your what-ifs,” said Breazeal. He added, “It’s easy to make a robot a chess champion, but then it wouldn’t do well at the awards ceremony, which is all about smiling, shaking hands and being nice. Well, that’s the challenge for my sociable robots: to be nice. “We’re still a long way off, “but they learn. And their capacity will be even greater when we manage to make them learn with us. We are systems and we learned to evolve. They are already learning to learn from us”.

3.-The mobile ceases to be just a cell phone to become a kind of “universal command” that controls all other devices, while it becomes an extension of our own senses and offers us valuable information, and in real time, about everything around us. And although the mobile phone is still the main protagonist, in this new edition, everything that is mobile began to occupy a place in this new mobile life: a whole legion of devices ready to be taken to our pocket, to our office, to our home, to our car and to each of the facets of our daily lives.

The growth figures are consistent, but they paint a picture of a two-speed present. While global mobile internet user data (as of Feb. 2018) exceeds 3.3 billion users, nearly 49% of the world’s population does not have internet access.

The global data of mobile devices with internet access (all types of devices including IoT-Internet Of Things) (as of Feb. 2018) is about 8.5 billion devices. Full connectivity does not yet exist, but it will come in the next two decades.

4.-Virtual and augmented reality. A mixed reality in which the tangible and the non-tangible merge. The bad thing is the discomfort of its use, the dependence on other devices or a quite improvable image definition. The good thing is that it goes beyond mere entertainment and its use extends to business, education, tourism and healthcare.

5.- Asians are on the march. Southeast Asian brands are increasingly present. It is no longer just South Korea, but also China and Taiwan are becoming more and more important in the mobile market. The Chinese have taken very seriously the idea of evolving from made in China to created in China…

We see more and more hundreds of millions being invested in creating and developing more and more intelligent devices. Many people have already put their memory in their smartphone. Will we see how they also put their intelligence there? If artificial intelligence changes our relationship with the mobile, to the point of not having to use it, because it will be so intelligent that it will know how to use itself, will the next editions of MWC be attended by our digital selves, our virtual selves, or will the user remain in control of the situation? The words of Matrix (1999) resonate “your current appearance is what we call a “residual self-image”. It is the mental projection of your digital self.”

Meanwhile, there will continue to be talk about new models, new designs, new utilities, what the user is concerned about is how to make the battery not be consumed so fast…and more plugs everywhere. If technology continues to advance much faster than users and their basic needs, it is in danger of becoming deeply disconnected from them. Ironies of the digital age.