The importance of a good name for a brand. 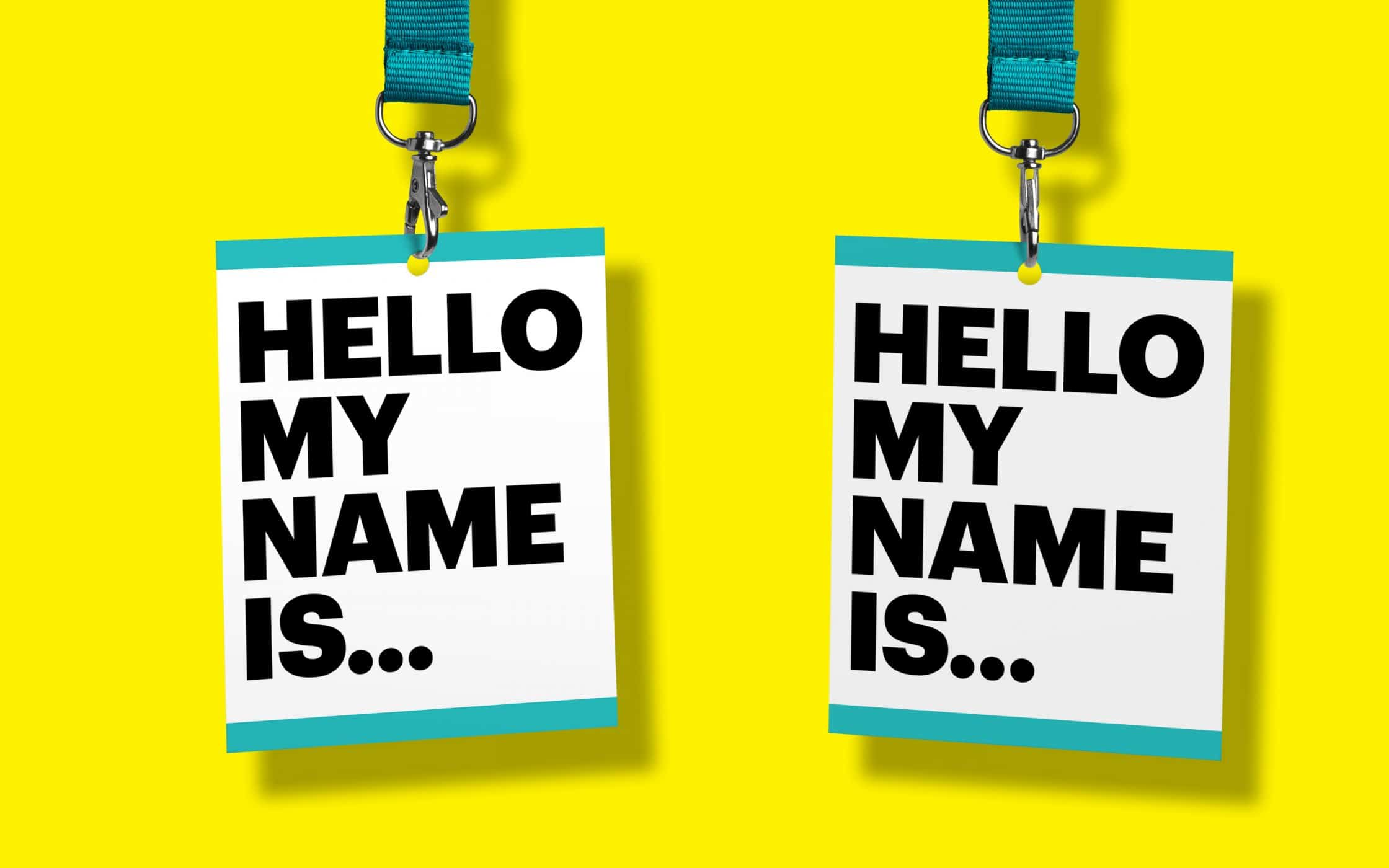 In the next two decades practically every brand in the world will be represented on the Internet. In this future, online identity will be a conglomeration of profiles that will go from Twitter to Facebook, from Instagram to LinkedIn, from Pinterest to YouTube, and etcetera known and others, still unknown. The impact that this has and will have on the choice of the name of each brand and on the development of identity will be huge. Shorten, synthesize, reduce, shrink, simplify names once again revolutionize the world of brands.

The name is a basic piece for the gear of any business strategy. A great name is like the extra octane in a brand. A bad name, boring, or that sounds the same as others, does not necessarily kill the chances of success of a brand. In most cases, however, it dramatically dilutes its value and potential.

The importance of having a name.

Many years ago, in Argentina, a Bank had a claim that had deeply penetrated the people. The commercial basically revolved around the idea that “a name is the most important thing one can have.”

When we are going to have a child or when someone close to him is going to have the obligatory question is: “What are you going to call him?” If brands, products, services, organizations, etc., were to ask the same question, we would be in a world where the name would not be just filling a file, but the first link in a series of links that build an identity. But what does name mean?

The name, according to Wikipedia, is the designation or verbal name that is given to a person, animal, thing or tangible or intangible, concrete or abstract concept, to distinguish it from others.
Today’s top brands could build a team of big names: In goal: Google. In defense: Apple, Youtube, Spotify, Uber. In the middle center; Zoom, Teams, TikTok. And up front; Slack, Trello, Twitter. On the bench: Amazon, Netflix, Airbnb, Dropbox, Android, Zara, Lush, Booking. Names that by themselves sounded strange to us at first, but that added to a brand, an identity, a business strategy were consolidating as part of our daily lives.
The name is a very powerful ambassador for any brand. It is the business card that the consumer saves in memory. The attributes associated with it come later and can reinforce its memory, but for this it has to “exist” and “be” previously. In addition, the name is a basic piece for the gear of any business strategy. If this part is faulty, the process runs the risk of resulting in failure. In these times of crisis, as Albert Einstein said: “Let’s not pretend that things change if we always do the same thing. It is in crisis when inventiveness, discoveries and great strategies are born.”

Using the name as part of the business strategy is essential. It is not one more thing, it is “the thing”.
100% of the names we hear every day define a person, a product, a service, a company, a place, a project, a school, a business center, but most are not able to communicate in a coherent and , when they do, they broadcast inconsistently.

In some sectors, the ease of haste, lack of strategy, resources or criteria are abused. Fortunately, many have realized its importance and they will be the ones to succeed.

In times of mergers or acquisitions like the one to come, most go the obvious way: use both names. But what is the new philosophy? What is the new culture? What is the new positioning? Sometimes 1 + 1 is not 2. And the name of the greatest is not always the most suitable name.

Finding “the name” is not the result of chance or fate, it is part of an increasingly professional practice. Some of the attributes that names should have, as a general rule, not particular, are to be attractive, memorable, easy to implement, recognizable and relevant to consumers. In addition, they must provide value, and impact the market. Originality, uniqueness, pronunciation, feasibility, and long-term endurance also add up. And, let’s not forget, take into account its potential as a marketing tool and that they have to be included within the branding program. And of course, registrable, both on and offline. One of the great trends that we are currently seeing in relation to brands is the one that directly affects their names. Seen in perspective, this market of excess and abundance affects all brands equally. The market is complex and what makes sense today, perhaps tomorrow will not, but the big question for your brand is: Do you create trends or do you follow those created by others?
These trends can be summarized in 6 groups of names:

1.- Symbol regardless of its name.This is the case of brands such as Starbucks, Nike, Shell or Apple. The brain can see and interpret an image at a speed of 13 milliseconds. Since it processes an image much faster than a text, helping the brain to recognize us before the rest helps.

2.- Shorten your name.Like the case of Mini Cooper to Mini or Christian Dior to Dior or Citibank to Citi. Nickelodeon to Nick. or Yves Saint Laurent to Saint Laurent, or American Express to Amex or Federal Express to FedEx. Pizza Hut and Radio Shack now “The Hut” and “The Shack.” Even the iconic YMCA, with more than 170 years of life, changes its name to “the Y”.

5.- Radical change.Examples like Philip Morris to Altria. Andersen Consulting to Accenture. Kraft Foods to Mondelez. To name a few.

Learning from the past.

In the past we have seen trends of these characteristics, such as: Computing Tabulating Recording Corporation that was renamed International Business Machines (IBM) in 1924! Or the Korean company Lucky Goldstar which shortened its name to “LG” in 1995. Minnesota Mining and Manufacturing Company changed to 3M. Procter & Gamble synthesizing itself at P&G, Integrated Electronics at Intel, or Svenska Aeroplan Aktibolaget at SAAB. New opportunities for the future.

Spanish is a language of inexhaustible richness and depth. The fourth most spoken language in the world, after English, Mandarin and Hindi. The second if we speak of a language that transcends a territory. The third most used on the internet and with tremendous growth potential.
CEOs of companies must ask themselves if the name of their company, product or service reflects who they really are, or want to be. Opportunities do not always present themselves, and whoever overcomes the crisis overcomes himself.
It is essential to analyze your strengths, or your objectives, and define a strategy that avoids “copying” trends, and bet on creating them. Some companies have understood the imperative need to adapt to digital. Others have had to do it to use friendlier links. Others due to the globalization and internationalization of their business. Others because Twitter “forced” them to do so. The essential thing is that they are not just aesthetic make-ups of the digital age.

On the internet, less is more.

There are specialists who believe that a brand with the potential to be shortened will ultimately be shortened and unconsciously simplified in the mind of the consumer. Others consider that using the “diminutives” could be trying to make the brand sound less pretentious, more casual and friendlier than they would sound using without it.
Some consider that names acquire meaning, they do not create meaning. Therefore, once the meaning is established, the brand name can be reduced to a shortened version of itself.
The client and the potential client have little time. They are rich in information and poor in time. It seems that brands consider that shortening the name is enough to improve their perception of each other.
It seems that what companies like IBM did almost a century ago is consolidated again between companies All trends are easy to understand, once discovered. The point is to discover them. Or create them.

Probably all opinions and points of view apply to this trend, but surely the best explanation is that a brand is a living organism, in permanent evolution and development. Shortening its name does not necessarily affect the perception that can be had of her, but the opposite can happen.
In short, shortening names is nothing new. For decades, brands have abbreviated their names. We live in a new world, where the “old” returns with force, for different reasons, different circumstances and different problems.

What should be maintained is the need to get away from clichés, to stand out and not fit in, to have creative thinking and courageous management. Thinking and acting differently is imposed again, although the essence remains the same.
Any of the groups of this trend can be useful for your brand strategy, as long as you are clear about what brand you are, who you are talking to, and above all where you are going and where you want to go. Always flexible with the situation, but consistent with your DNA.
Unfollowing others and creating new trends won’t be easy for your brand, but it will be worth it. The name deserves a much more relevant place in business and marketing plans.