Hostages of the instantaneous. 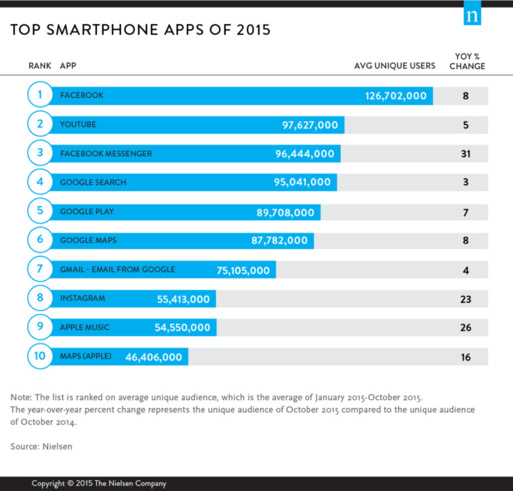 Six of the 10 most used applications in the world are instant messaging services, according to Quettra and quoted in The Wall Street Journal where it is now completely usual to read news from the Brandoffon world.
But Quettra’s data do not quite match those of the consulting firm Nielsen. The latter presented a report that said that among the ten most popular apps of 2015 there are five from Google, three from Facebook and two from Apple. There are voices that say this is not fair, since in most smartphones, Google and Apple apps are already preinstalled. Yet the numbers speak for themselves.
In the United States, 90 percent of the time spent on the Internet on cell phones is spent on apps. And 77 percent of app users stop using apps within three days.
Users log into messaging apps like WhatsApp and Messenger an average of 25 to 30 times a day, compared to 15 times a day to view Facebook’s News Feed.
WhatsApp is very close to reaching 1 billion users, seven years after it was launched and two years less than it took Facebook to reach that number. Meanwhile, the instant messaging app Facebook Messenger, and WhatsApp’s rival despite being owned by the same company, has already surpassed 800 million users worldwide.
The impressive growth of messaging apps no longer attracts attention, because sooner or later, one-to-one conversations more closely reflect the way people interact on a daily basis.
Users are not replacing other networks with these (or are they not social networks too?). WhatsApp is filling a void that, obviously, no one has ever filled before. The app is filling a more primary need, which is to be in permanent contact. Permanently connected.
Perhaps today it seems less far-fetched that Facebook paid 22 billion dollars for the acquisition of WhatsApp in 2014.

Messaging services spread like a virus. In Japan, Taiwan, Indonesia and Thailand, Line. In China, some 550 million people use Tencent’s WeChat every month. Like South Korea’s KakaoTalk, with more than 100 million.
Brands and companies should be very attentive to how the rise of Messenger, WhatsApp, Snapchat (which has just been joined by the White House), Telegram and others on the way, such as Google’s new service, will continue to impact user behavior.
And also because of the implications not only of marketing, but also of the jurisprudence itself. Private messages received by a worker in messaging apps such as WhatsApp, Yahoo Messenger or WeChat, if they were consulted during working hours, may be read by employers, according to a new ruling of the European Court of Human Rights. Progress moves faster than legislation and often the latter slows down leaps into the future. In any case, some trends are unstoppable, and this one has only just begun. It’s just a glimpse into the future.
Technology is a reflection of man. In today’s fast-paced world, instantaneous is already the norm.
About the author