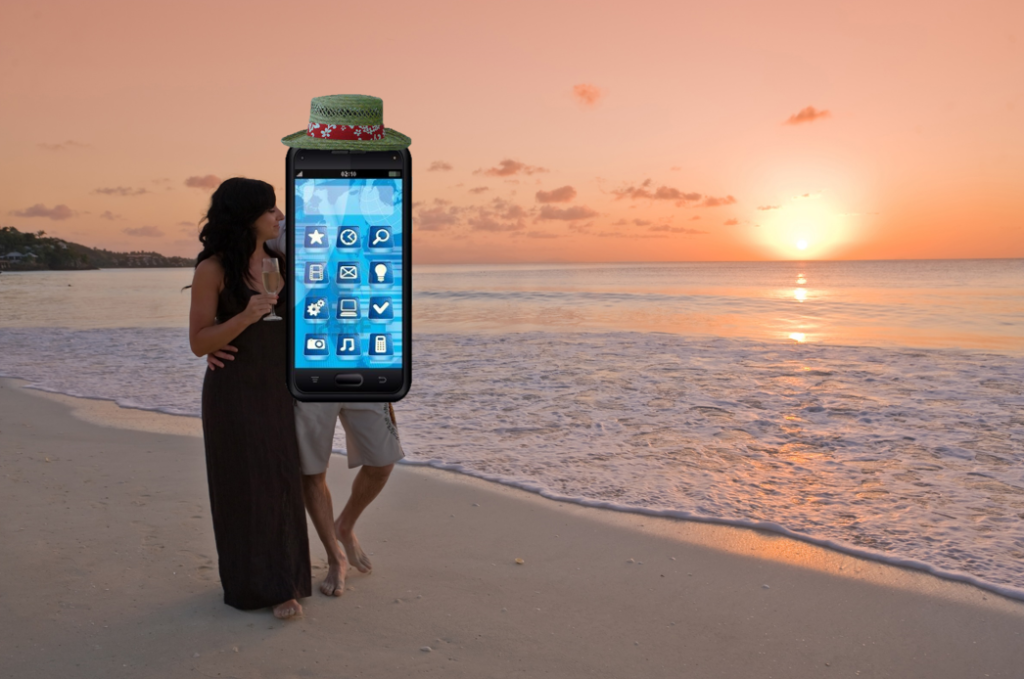 On July 31, 1944, Antoine de Saint-Exupéry died in Marseille, France. In the course of his many travels, he never ceased to observe, to explore and to explore. He bequeathed us countless lessons and above all a central issue, that of not ceasing to be connected with our inner child. Almost seven decades later we are more than connected, but not so much with that inner child as with our smartphone. It’s not what Saint-Exupéry imagined, nor us.

August began and with its arrival ended “normal” activity in Spain. Let’s say that, after the selectivity and the end of school, young and old say goodbye to their routine for a few weeks. A period of time opens up that many adults view with panic. “What to do with so much free time?” “The kids are going to get bored,” one hears people say; as if a dose of boredom were a bad thing. This is precisely what the excellent blog Rebeldes Digitales talks about, pointing out that “human beings have a characteristic that is unique to their species, and that is their ability to get bored. No other living being gets bored, neither animals nor plants do; only man gets bored and he is also aware of it”.

In the heat of this change of cycle (political, economic, social, vacation) I was surprised by the first conversations I had. Many of them, strikingly, had to do with childhood. I do not know if it is a generational issue, but they spoke to me, and a lot, about the need to recover the spontaneity, freshness and honesty of children. But above all about curiosity. The handbrake applied during the summer months means that many older children can see their little ones with more time and attention. Despite the need to be able to disconnect, almost 7 out of ten people recognize that they can’t stop being with their phone, even on vacation. “Adulthood has taken me away from that childlike naivety. And I miss it,” one colleague told me. Another one told me with her intense look that “this life of uncontrolled speeds, superficiality and masks makes me fed up… but it’s what it is”, she finished as if with resignation. In another meeting they mentioned to me that the best thing about vacations is “disconnecting” and they also mentioned to me the “magic”, the “fantasy” and the “illusion”, with a hint of longing for the dwarves’ capacity for surprise. “Nothing surprises us grown-ups anymore. They are surprised by everything.

“We live on autopilot…I don’t know where I’ve left my capacity for surprise.” I am not surprised by these comments, on the contrary, I am glad. Not what they describe, but the awakened awareness of what happens to us. And without awareness there is no way to change anything. Without a connection with what happens to us it is impossible to face a change. Our society is living a moment of digital exhaustion and at the same time it is alienated with so much stress. Exhaustion that we could call exhaustion. The vast majority of Spaniards find it impossible to disconnect during the vacation season “because of” their smartphone, as they can’t help but look at it at some point. As if the device had a life. The only fault, if there is any, lies with people who do not know how or cannot deal with technology. Curiously, when Spaniards were asked about what would be their ideal vacation? More than half of them answered that they would be those in which they would completely get rid of the telephone, but we already know that there is a long way between saying (the desire) and doing (the reality).

Although in the month of August, professional activity is practically in the background, one of the main reasons for staying on the phone, they say, is work, especially in positions of greater responsibility. A senior executive told me that the higher you are in the corporate hierarchy, the less free you are. Paradoxes of the profession.

The truth is that not being able to disconnect for work reasons, despite the fact that more than half of us would like to, generates stress. Yes, on vacation. The paradoxes continue. In the end, disconnecting for a few days has beneficial effects on mental, physical and, above all, emotional health.

It is true that children under 10 still live in a world that seems so far away from that of adults. A world without masks, where he who laughs laughs, he who cries, cries and he who disconnects, disconnects. Where a yes is a yes and a no is a no. Where curiosity reigns and imagination rules. A world of imaginary characters, cartoons and love without barriers.

I looked around me today and there were only people running, rushing, accelerating. But I also saw people watching without sharing this reality we created. People who are convinced that taking back certain aspects of childhood and bringing them into the corporate universe would be a blessing.

The brain is an organ that is in a permanent learning process. But when it is confronted with something unknown, what it does is relate it to something it already knows. This is its safety net, although deep down the brain is also self-deceiving. The truth is that the process of ceasing to be a child is unfamiliar, and to this is added technology, which is also unfamiliar. For many adults, technology is also a new territory, and this new space has distanced them even more from what is essential.

The daily avalanche of emails, whatsapps, social networks, real-time information, apps and so on has filled them with stress, has exiled them from the here and now, has taken away their concentration and attention. And in many cases it has made them less productive, even though technology was supposed to make work more efficient. What we do now is not multitasking, it is not even procrastinating, it is changing tasks at an unacceptable speed and it has made us less productive, generating higher levels of anxiety. Seeing someone thinking, reflecting is synonymous with wasting time. It is ironic to think that time is lost, time is not lost, what is lost is the awareness that we are finite beings.

Some parents will say that many children are also stressed and suffer from anxiety. And it’s true, many do. The system is designed for that, not the other way around. There is no system that enhances the human factor, creativity and emotions. Today a child has more information on Google than any adult did when they were their age. But children, despite adults and the expectations they place on them, are still children.

In Rebeldes Digitales they also point to education and the system, “current education also tries to consciously eradicate this evil and pushes us to point children from a very young age to thousands of extracurricular activities, many formative and many other filler, but anything goes if it serves to avoid at all costs to let children fall under the influence of this evil.”

“Boredom,” the Digital Rebels post adds, “is usually fought with technology, work, study, intense social activity or an overdose of entertainment.  And today’s entertainment menu presents us with such a wide variety that sometimes it even intimidates us.  A feeling similar to when the cable signal offers us the possibility of choosing among 400 channels and in a fit of vertigo in front of such an amount of options, one turns off the television and picks up a book. But if you know your preferences well and know where to find them, everything turns out to be much simpler”.

Back to the end of the school year and the beginning of that period of pause, reflection and disconnection from the routine that is summer. It is in that period when we remember that the most important thing in life, after health, is love because it reflects the most important thing in human beings, generosity, giving. Giving without filters, without interest and without interest. Giving just for the sake of giving. When a child receives two pieces of candy when he is with a friend and instinctively stretches out his arm to give one of the two pieces of candy to his little friend, he is not speculating. He does not expect anything in return, he shares because he loves his friend, because it is in his essence. Surely, as the days and weeks go by, the little ones will pass on to us this unlimited capacity for curiosity and connection with the essential. “Children always tell the truth” we repeat over and over again. And in this prevailing age of false lies there is George Orwell who said, “In an age of universal deception, telling the truth is a revolutionary act.” Orwell who died six years later than Saint-Exupéry also spoke to us of a complex future.

When we connect with that they are important times in the formation of our children that if we do not put it in value we miss out on life experiences that only happen once. We are building memories, let’s not forget that.

We all have the possibility of recovering our childhood, our most authentic and honest essence. Perhaps then we will not have to connect with that curiosity, that imagination and that creative freshness of children only when school ends, summer begins and we stop, for a while, running.

On a day like yesterday in 1944, Antoine de Saint-Exupéry, author of The Little Prince, took his last flight. He still makes our imagination fly. Grown ups never understand anything on their own, he wrote, and it is very boring for children to have to explain it to them over and over again, he said, and then he left.